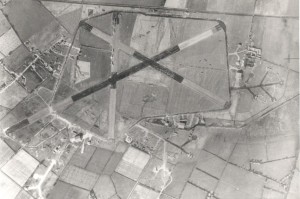 Ballykelly Airfield was officially an RAF base but it had a significant USAAF presence on occassions throughout the war. In October 1942 a number of US Navy amphibious Catalinas were temporarily based here when in transit to Morocco from Iceland. While at Ballykelly they carried out anti U-boat patrols sinking two and damaging several more. In September of 1944 B-24 Liberators patrolled the north and north-west of Ireland through Ballykelly on an almost daily basis. Even though they found evidence of U-boat activity no attacks were made.

Train passing over the runway at Ballykelly