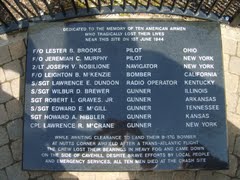 Belfast Zoo (15 minutes on the M2 from City Centre) has a memorial in its grounds dedicated to American Airmen who were killed while training in Northern Ireland. Here you can view the plaque to ten American Airmen who died in a crash on Cave Hill. The B-17 bomber came down in heavy fog after getting lost on the way to Nutt’s Corner airfield. A film directed by David Attenborough called ‘Closing the Ring’ was made about the crash. It tells the tale of how a young Belfast man finds a gold ring belonging to one of the crew at the crash site, and then follows him as he tracks down the gunners girlfriend.

The Story of the Crash (from Belfast Telegraph article)

The B17 crashed on Cave Hill on June 1, 1944 on a flight from Newfoundland to Nutt’s Corner – then an American air base.

“It is believed that the pilot in poor visibility confused his first glimpse of Belfast Lough for Lough Neagh and flew straight into Cave Hill after his wireless operator took a reading from Langford Lodge which was also an American base on the Lough Neagh shore,” says Ernie Cromie of the Ulster Aviation Society.

Today there is a memorial on the hillside near the scene of the crash where pieces of uniform and fragments of the B17 are still being uncovered.

The film ‘Closing the Ring’ is the story of a battered gold ring found at the site in 1991 by Alfred Montgomery, a 43-year-old lorry driver from Carnmoney.

He spent three years tracking down the widow of the owner, air crash victim Staff Sergeant Lawrence Dundon in Kentucky, to where Alfie travelled to return it to her.

She was then remarried and widowed for a second time and called Mrs Ruth Gillespie.

Montgomery became fascinated by the story of the tragic Flying Fortress when he was first taken up the Cave Hill by his father to the site as a boy one Sunday afternoon after Sunday School at Ballysillan.

He has been a regular visitor to the scene ever since and has picked up various artefacts from the wreckage. And then came the day when he found that ring on which the names of Lawrence and Ruth were poignantly etched.