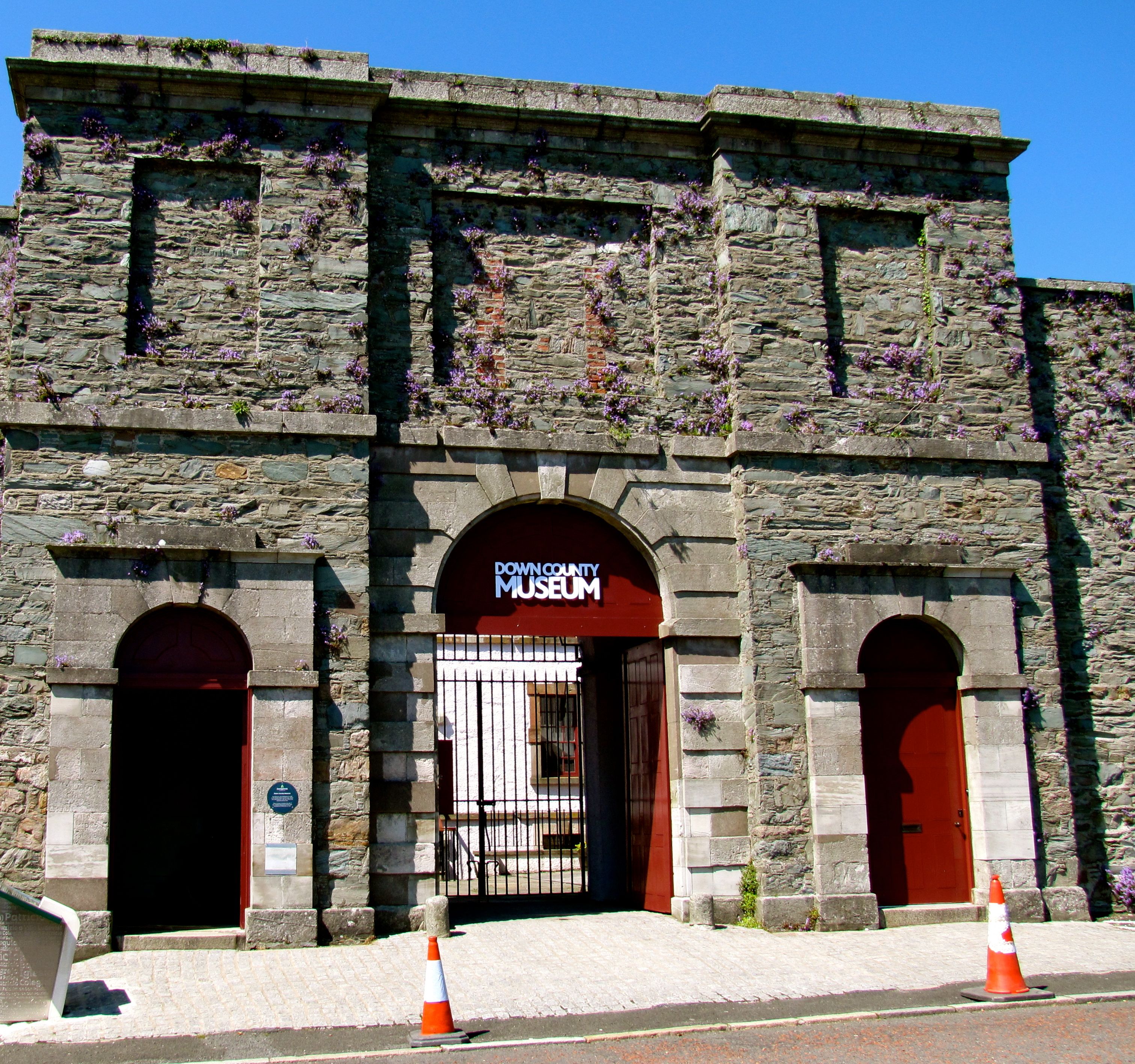 Down County Museum is situated in Downpatrick and is an excellent museum covering many periods of local history. The rich heritage of County Down is brought to life in fascinating exhibitions, lively events, hands-on activities and award winning education programmes. Visitors can explore the history of the old Gaol, enjoy the permanent exhibitions and see one of the special, temporary exhibitions displaying objects from varied collections. The Museum’s new extension, containing three new permanent galleries and a brand new tearoom is now open.

Check on their website for opening times and exhbitions – www.downcountymuseum.com

The Gaol During the Second World War

A battalion of the United States 1st Armored Division moved into the Gaol in 1942, under the command of Lt. Colonel John Waters who was the son-in-law of General Patton.

Elements of the 1st Armored Division were also situated nearby in Downpatick at Downpatrick Racecourse.

Memories of an American Soldier in Downpatrick

Robert McDowell was a US Army soldier who remembers spending time in Newcastle and Downpatrick in the lead up to the allied invasion of Europe. Robert was billeted with B Company of the 123rd Ordnance Battalion of the First Armored Division in Newcastle for around 2 weeks and remembers staying somewhere near the Newcastle Centre. He was then able to rejoin his original unit, C Company, in Downpatrick. Robert and the 210 men who were part of C Company were billeted in the Old Gaol.

Robert’s regular duties involved patrolling the town. They started from the Gaol, went down English Street, up Irish Street, took in a water reservoir and back round to the town, ending up on Church Street. He claims that completing this circuit took about two hours, as they were always greeted by local folk at their front doors and windows and offered tea and crumpets, and often treated to cream and sugar.

Robert got to know a girl who worked in a fish and chip shop in Scotch Street. He remembers her name was Margaret, and went to her house for dinner with two of his army friends, Fred Hamilton, from Charleston in West Virginia, and Charles Dearing, from West Kentucky. As a gift they took a can of pork meat, the type that could be sliced. Robert claims that they had many different types of rations that weren’t available outside their canteen, so they shared with the friends they made. Robert believes that Margaret eventually married a GI and went over to America.

Robert’s Mess Sergeant liked canned pork and would make up a good meal of pork, mashed potatoes and gravy. They were also lucky enough to have solid chocolate bars that could be dissolved in water to make a chocolate drink. Robert and his friends would give these to local children to take home to their families. Chewing gum was also a novelty in Downpatrick. One of Robert’s friends took a girl out to the cinema in the town and gave her some chewing gum. A few minutes later she asked for some more, as it turned out she had swallowed it!

Robert remebers seeing the Saul Church and the King and Queen visiting County Down. There were dances in the Town Hall from time to time, some for enlisted men and some for officers. The soldiers liked to visit the locals bars in the town but sometimes there would be fights. Two men from his company got into a fight outside the railway station, and one put his fist through the window of the station building.

Robert celebrated his 19th birthday on 5th September 1942, just six weeks before his company left County Down. Robert stated that it was quite something to discover that the Gaol had become a museum, and a figure of a GI had been set up to commemorate the time they spent in the town from May to October 1942.

History of the Gaol (from www.downcountymuseum.com)

In March 1798 the Belfast Newsletter announced that the County Grand Jury of Down intended to build a new gaol for the County. It was to be modelled according to the recommendations of the penal reformer John Howard. The architect was Charles Lilly who also carried out work on Down Cathedral.

The Gaol opened in 1796. It was hoped that the new building would have none of the overcrowding associated with the old prison system and would be an important tool in the reformation of society. However the 1790s in Ireland were times of economic and political turmoil and the consequent rise in crime soon led to the Gaol being overcrowded and insufficient for the needs of the County.

There were only 18 cells in the Gaol, all of them uniformly small, yet up to 130 prisoners were accommodated at once.  They were fed on a diet of potatoes, oatmeal and water, with some bread. The water supply was poor, the cells unheated and unglazed. In 1818 there was a serious outbreak of typhus in the summer, so serious a Gaol infirmary had to be established.  Discipline was very bad, breakouts were common with at least three transportees making a successful bid for freedom. In 1804, the turnkey, Owen White, was even sacked for aiding and abetting a large scale rescue of prisoners!

Conditions soon became so bad that a new gaol was planned. This eventually opened in 1830. The old Gaol was then used as barracks for soldiers.  The South Down Militia used it for much of the nineteenth century. American and Canadian Servicemen were stationed here during the Second World War.  It had a variety of uses in the 1950s, 60s and 70s before falling into dereliction. It was rescued by Down District Council in 1980 and purchased as a site for the County Museum.

Today visitors to the Museum can walk through the restored buildings of this fine Georgian gaol and see something of the conditions in which prisoners were kept.