On the way through Markethill, you can visit Gosford Forest Park and Castle. During the Second World War the castle housed American troops and was a German Prisoner of War Camp.

The 15th Field Artillery Battalion arrived in Northern Ireland late October 1943. The Battalion HQ staff and Battery commanders plus other officers were housed in Gosford Castle. A field nearby was also used by US Army Field Artillery Piper L-4 Aircraft. Before leaving they were addressed and inspected by General Patton.

The castle has been renovated and restored and is now available to rent as holiday accommodation. If you are interested in staying in this fabulous castle please visit Trip Advisor. Gosford Castle was also used as a location in HBO’s award winning series Game of Thrones.

The untitled Acheson family who were later to build Gosford Castle came to County Armagh in 1610. At first they lived in a stone bawn until it was burned down in 1641. Towards the end of the 17th Century, the now Lords and Ladies of Gosford built a manor house for prestigious guests, one of whom was poet and satirist Jonathon Swift. He lived at the manor for some time and composed some verses based on life on the estate.

The Castle was commissioned by Archibald Acheson, the second Earl of Gosford, in 1820. 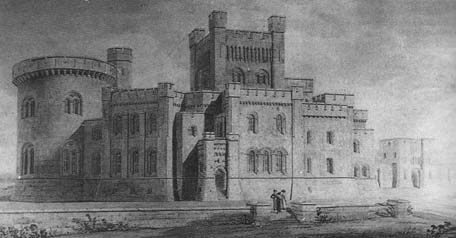 Drawing of the house as designed by Thomas Hopper in 1819-21. Image from http://landedfamilies.blogspot.co.uk/

Lady Gosford took considerable interest in the construction of the family seat, not surprising since she was probably providing much of the revenue. But before the Castle was completed Lord and Lady Gosford had separated. Lady Gosford went back to live at Worlingham, where she died some years before her husband in 1841. The story is told that, “on its return journey to Co. Armagh for burial in the family vault at Mullaghbrack, her coffin was mislaid by the drunken servants whom Lord Gosford had sent to fetch it, and was conveyed by train to somewhere in the Midlands.”

Leading architect Thomas Hopper proceeded with stone being transported from the Mullaghglass quarries to construct the large mock twelfth century square stone keep and smaller circular towers. Hopper continued to act as chief architect of the Castle until his death in 1856 but even before this small alterations were made to the design by Thomas Duff and George Adam Burn who would succeed Hopper.

Throughout the duration of the Castle’s construction the Gosford family lived at Rostrevor. The castle was never permanently occupied. The family it seemed preferred to make use of the Castle as a summer home and an attractive venue for Grouse shooting in August and September.

The interior furnishings were sumptuous and eye-catching. Though the Norman style of Castle would have been unsuitable for nineteenth century living, the interior was significantly more comfortable than the exterior suggested. Vaulted ceilings were picked out in gold and all throughout the Castle were the most intricate of woodcarvings. 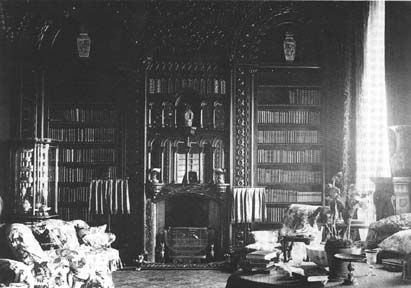 The library of the 3rd Earl at Gosford Castle. Image from http://freespace.virgin.net/rita.uahs/gosford.html

Forty years after work began the Castle was occupied but not yet finished. Little more than a generation of the family got to enjoy the castle before they began to feel the financial strain. The Fourth Earl of Gosford was a part of the Edward VII set and to settle a gambling debt sold off the Castle’s excellent library. Still the Castle was a burden and finally its contents were sold at auction in 1921 severing the Gosford family connection with the locality.

During World War Two the Castle was used as a Prisoner of War camp to house American soldiers and their German prisoners. For some time after that it was home to archives belonging to the Public Records Office of Northern Ireland and then used as a winter base for a travelling circus.

In 1958 the Castle and Estate were purchased by the Forestry Commission of Northern Ireland but though the estate was opened to visitors the Castle remained dormant until the 1970’s when it was again garrisoned by troops during ‘The Troubles’. In 1978 the Castle was sold to a Belfast family who attempted to establish it as a hotel. The costs of restoring the Castle and establishing this venture were too extravagant and its hallways once again fell silent.

The castle however has now been restored and can be hired for events or as a holiday home. If you are interested in staying in this fabulous castle please visit Trip Advisor.

For more information on the history of Gosford Castle please visit these sites:
http://landedfamilies.blogspot.co.uk/ 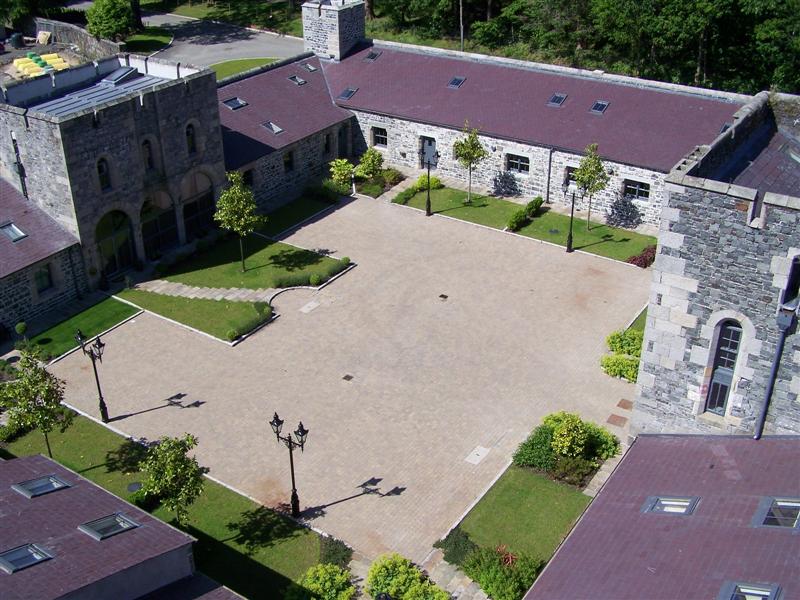 In 1958, Forest Service acquired Gosford Demesne. Prior to this the Earls of Gosford owned the estate for centuries. They were descendants of the Acheson family who established woodland, parkland and edifices on the estate. Gosford Forest Park offers visitors paths and trails to see these historical features, and the mix of conifer and broadleaf woodlands, with its diverse flora and fauna.

The deer and rare breeds enclosure are on the remnant of open parkland that was an important landscape feature of the Earl of Gosford’s estate. Forest Service has maintained this historic landscape feature and the red deer are one of the three varieties found in Ireland. The Heritage Poultry is a collection of some original poultry breeds that many of modern fowl are derived from.

Prior to the availability of electricity other methods were used to provide power. The mill wheel in the car park was driven by water to process grain. To ensure a steady supply of water the millponds were created to hold a constant water supply. Although their use as millponds is redundant they offer an ideal environment for flora and fauna that thrive in a water habitat.

The gateway to Clonkearney Manor, the original home of the Earls of Gosford, lies between the two ponds. A fire destroyed the house in the 1600s. The arched gatehouse remains which was designed to house two families, one on each side of the archway.