A poignant reminder of the dangers of operational service even in the comparatively uncontested skies of Northern Ireland lies in the churchyard of Christ Church, Limavady. Here you will find the grave of Flight Sergeant William B. Fry from Texas who was a volunteer pilot with the RAF based at Ballyhalbert. He died when his Spitfire crashed near Dungiven during a joint military exercise with British and American forces on 26 September 1942. 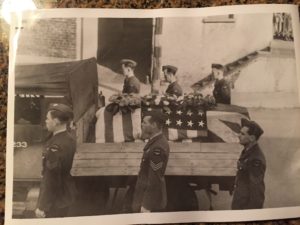