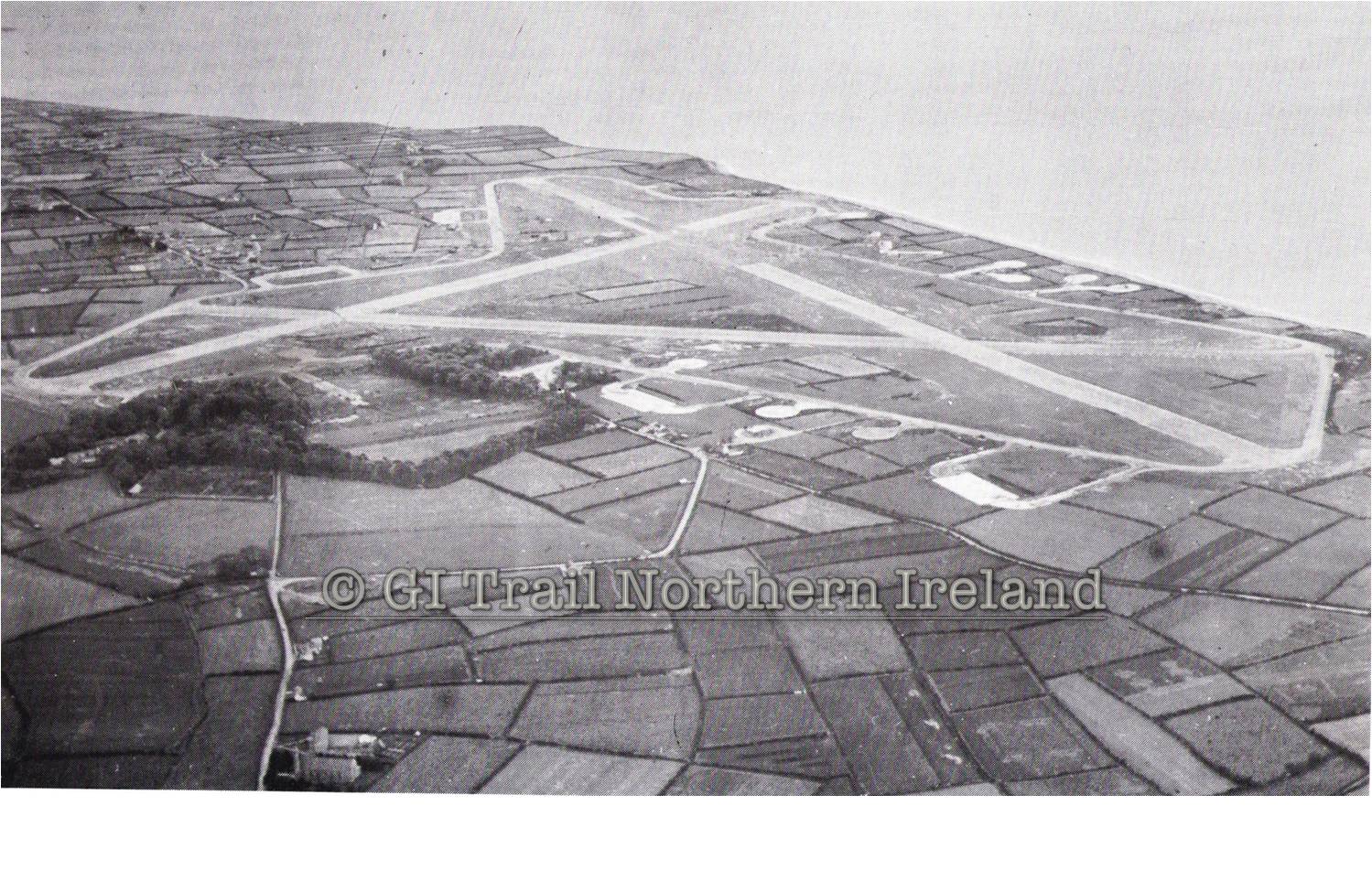 Greencastle Airfield was a key training facility for the US Army Air Force and the only airfield solely dedicated to the training of US troops in Armagh and Down.

The best spot to get a feel for the old airfield is by visiting the small hamlet of Dunavil and heading down the Slatemill Road. Standing on this road you can see the land the runways stretched across and the old Control Tower. Look carefully at the walls around you – they are built from the broken up runways of the airfield and some contain old machine gun firing stands. While out here you can turn back off the Slatemill Road to your right, where you will see the old Bomber Training Buildings almost immediately on your left. These tall buildings are now listed and well worth a look. For those who have more time, please visit the Nautilus Centre at Kilkeel Harbour where you can learn more about Greencastle Airfield. 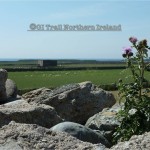 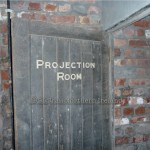 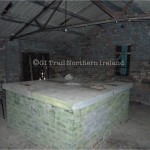 The annual GI Jive Festival which takes place in Kilkeel in July commemorates the presence of the US troops in this area. Please visit their website to find out more – www.gijivefestival.com 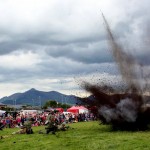 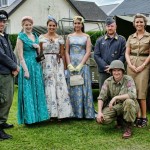 A Short History of Greencastle Airfield

Work began on Greencastle AAF Station 237 in January 1942 and it was opened on 30 July 1942. It was handed over the to the Americans on 3rd August 1943 and was initially used by them as a sub-depot for Langord Lodge. The airfield was 350 acres in size and had four T2 hangers. The main runway ran NE-SW parallel to the sea and was about 1.5 miles in length and 150 ft. wide. The concrete was no less than 6 inches thick, 9 in some places.

The official handover of Greencastle to the US from the RAF, August 1943. These photos were taken at Mourne Wood. This property is still owned by the Patterson family today.

Greencastle was an important stop over facility for aircraft and aircraft storage. It became a Combat Crew Replacement Centre for US troops where they underwent training in airplane maintenance and flying operations. By February 1945 there were an amazing 320 aircraft on the ground. Greencastle housed the air-to-air and ground-to-air gunnery schools and the 4th Gunnery and Tow Target Flight. May 1944 was the busiest month, with the gunnery schools turning out 868 graduates. Aircraft carried out gunnery practise near Dundrum Bay and air to air firing off Annalong and Ballymartin.

Greencastle closed in 1945 and in the 1960s the runways were broken up and used by farmers to rebuild the boundary walls of their fields. These walls still snake through the Cranfield area, standing as a unique reminder of the war days in Mourne. 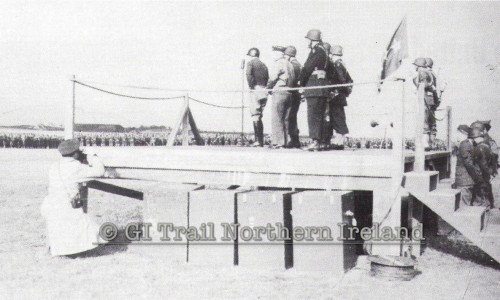 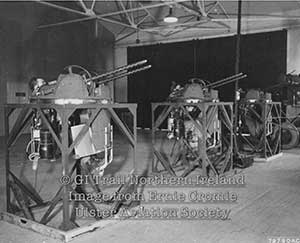 In a history of Greencastle AAF 237 by the 8th Air Force, Lt Colonel Thomas L. Dawson who became commanding officer on 15th November 1943, claimed Greencastle was the most beautiful spot in Ulster and stated that the men always felt as though they were worlds away from the war due to the kindness and hospitality of the Mourne folk, keeping their morale high, “In retrospect, a large number of soldiers at Greencastle will say that their life at Station 237 in County Down was much more enjoyable than any spot in the states, although they did miss their relatives and friends. Irish people proved very hospitable and did everything to keep the boys’ morale high. Christmas dinners were plentiful around the Yuletide seaon, and acquaintances that were made during the holiday weren’t soon forgotten.” 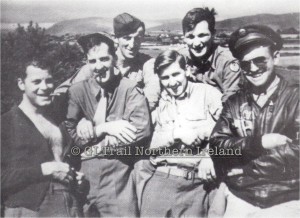 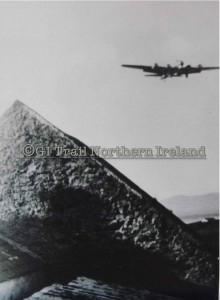 Left: American instructors at Greencastle. Right: A B17 Flying Fortress on approach to runway no.1 at Greencastle, 1944. Photo taken by Jim Patterson.

Ernie Cromie of the Ulster Aviation Society has kindly shared some of his correspondance with two 8th Airforce men who were based at Greencastle in 1944.

Joseph A. Connell from New York was initally stationed at Gosfield, East Anglia in England and was in the Technical Supply section of his Squadron. However, Joe wanted to be a gunner, so he asked for a transfer and ended up being sent off to the anti-aircraft gunnery school in Northern Ireland.

‘Our group of would-be gunners set out for Northern Ireland in a C-47, but were turned back over the Irish Sea by a front that resembled a towering wall of mean looking clouds… We spent the next three days making the same trip by truck, an English train, a ferry and a Northern Ireland train, over-night on the way in a rail station and a British Army Base. We saw a lot and it was a good experience.

After some says spent at classroom work, our first firing was of air-powered machine guns that fired dry green peas at moving paper targets, all within a large hangar. The real guns were in a battery at the top of a cliff that dropped down to the beach and except for the noise of our guns it was a beautiful place. We fired at tow sleeve targets, and I could not imagine what the pilots had done wrong to draw this kind of duty.

I remember it [Greencastle] as a very nice location, especially the cliffs overlooking the water.

Bill Sullivan from Massatuchutes was at Greencastle from July to September 1944 and then went back to England for reassignment. Bill was happy in Northern Ireland. It was a welcome break after completing his thirty missons and during his time here his job was to familiarise the ball gunners with the operation of the Sperry Ball turrett.

Bill passed down valuable, life saving knowledge from his missions, showing the men how to wear their chutes while in the turrets, “After one of my very early missions to Berlin where I saw so many Forts go down with very few chutes to be seen I decided to wear my chute in the turrett… So I showed them how to hook up one side of their chest chute to the harness and let it hang making a comforatble arm rest.

“The living conditions were quite adeqaute… My barracks was the last in line and just outside was a stone wall overlooking a valley which gradually sloped up toward the Mourne mountains… I used to love to go to town for breakfast on my free mornings where there were homes that would provide steak, eggs, jam and toast and tea for a very modest sum. And I remember one dear old soul who said she really enjoyed serving the ‘Yanks’ because they seemed to enjoy eating so much. I remember one trip to Newry… but other than that a few trips to Belfast on my own were enough for me as I loved the local surroundings such as the Lighthouse Cafe to keep me satisifed.”

If you want to learn more please visit the Nautilus Centre at Kilkeel Harbour where you can view an exhibition on the airfield. The Visitor Information Centre is also based here along with the Mourne Maritime Centre. If you want to learn more about the airfield there are many local experts who can assist you and some are even available for guided tours. Just ask at the Visitor Information desk and they will be more than happy to help. One local expert, Joe Boden was a school boy when the Americans arrived in Kilkeel and built their airbase right beside his house.