Grey Point Fort is one of our Top 5 Must See Locations. It can be accessed via the North Down Coastal Path. A good starting point for the walk is the visitor centre at Crawfordsburn Country Park. Volunteers have created an amazing museum of military memorbillia from the First and Second World Wars. Please check the Discover Northern Ireland’s website for opening times.

Grey Point Fort is a coastal defence completed in 1907 as a WWI defence battery commanding the entrance to Belfast Lough. It has a sister battery across the lough at Kilroot. During the Second World War the Fort was used to protect agaisnt naval attacks, watching over the US warships in Belfast Lough. When any ship entered the lough it was contacted by Coastal Defence Personnel and asked to identify itself. If there was no reply it was told “heave to or be sunk” and if there was still no suitable response a shell would have been fired across the ships bow as a final warning before opening fire with explosive shells. The Fort was a key coastal defence but proved of little use during the attacks on Belfast during 1941. 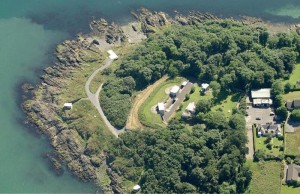 A Brief History of the Fort during the Second World War

The Fort’s main role was to protect the lough from naval attack. During the war the gunners carried out regular target practice. A tug from the Clyde towed a barge a mile behind with a checkered target. Twice a week the gunners fired at the target. Ahead of this, local residents had to be warned to open their windows and doors to prevent damage due to the blast. The gun crew were warned to keep their mouths open when the shot was fired to prevent internal damage from the blast waves. Reports from those stationed at the Fort would suggest that the target was usually missed.

Defence against the threat from the air soon became a high priority, and the decision was taken to protect the coastal defence guns by providing them with concrete overhead covers. These were completed by 1940, with the roof being 3 feet thick.

Over the years the Fort had some distinguised visitors. Anthony Eden, then Secretary of State for War visited the Fort on 24th July 1940, accompanied by the Chief Controller of the ATS.

Anti-aircraft defences were provided by the deployment of one 3-inch anti aircraft gun at each fort. The gun for Grey Point was mounted on the fairyway of the second hole at Helen’s Bay golf course.

By August 1943 the decision was made to put the guns at Grey Point into a state of care and maintenace, and by December that year the battery was placed on the care and maintenace basis. In Spring 1944, during the preparation for D-Day many ships including the American battleships the Arkansas, Nevada and Texas were moored in Belfast Lough. It is estimated that the total number of officers and sailors on board was around 30,000. The ships left on 3rd June as part of the major bombardment fleet in support of the landings. Eisenhower had visited the fleet while it was moored off Bangor.

After the war, the two forts at Grey Point and Kilroot were retained in a state of care and maintenacnce under the supervision of the 207th Independant Maintenance Battery RA while the war office considered their future. On 17th February 1956, the Ministry of Defence announced the end of coast artillery. A farewell ceremonial parade with the lowering of the Union jack and a ceremonial march around the camp was held at Grey Point on 24 March 1960.

To find out more about Grey Point Fort please visit the website set up by the dedicated volunteers who run the site – http://www.greypointfort.magix.net/public/