There were many important airfields scattered throughout the counties of Antrim and Londonderry. One very important American airfield was Langford Lodge but unfortunately it is on strictly private property.  Langford Lodge Air Depot was the largest USAAF airfield to be developed in Northern Ireland and was officially designated  No.3 Base Air Depot in September 1943. Langford Lodge was operated by the civilian Lockheed Overseas Corportation (LOC) on behalf of the Eighth Air Force Command.

Construction of Langord Lodge began in February 1942. The plans included barrack huts on five living sites with integral communal facilites, numerous hangars, workshops, warehouses and the construction of three hard surfaced runways. Only two were built however. In July 1942 a hospital wing was constrcued. It was built in the shape of an H and included offices, reception rooms, dispensary, X-ray room, pharmacy, dental clinic, surgical ward etc. It was extremely well equipped and thought to be one of the most modern installions in Northern Ireland. The doctors, nurses and medical staff were all Americans. To compliment the medical staff, a platoon of the 55th US Field Hospital was assigned to the base.

Upon request, the Great Northern Railway built two and a half miles of single line rail track to link the depot with the main network at Crumlin. Up to May 1944 around 4000 US civiliams were brought from the USA to work at Langford Lodge. They were among the most highly skilled technicians in the world, and were more than capeable in every aspect of aircraft servicing, engineering and assembly work. Over the same period the LOC American civilian personnel were complemented by similar numbers of local civilians recruited to perform many  jobs including office clerks, telephonists, building labourers, canteen staff and truck drivers. They commuted to work by rail or road or in vehicles sent out to collect them. On 1 January 1944 a ‘snapshot’ survey revealed a total of 6900 on the base – 2913 local civilian employees, 2883 Lockheed personnel and 1104 US military; the base was sometimes referred to as ‘Lockheed City’.

The processing of USAAF aircraft began on 27 October 1942. Urgent modification work began on B-24 Liberator Bombers of the 44th Bomb Group, Eighth Air Force. Growing numbers of Douglas C-47 transport aircraft began to arrive, some to undergo repairs and some to be modified for use by the Twelfth Air Force in North Africa. On 11 November 1942, aircraft reassembly work commenced with the arrival of the first of many P-38 Lockheed Lightening fighters which were brought by road from Belfast, to which large numbers would evenntually be shipped from the USA as deck cargo. Towards the end of November, assembly work commenced on considerable numbers of the Brewtster Bermuda dive-bomber.

Between November 1942 and April 1944 almost all the aircraft that passed through Langford were used by the American Eighth, Ninth, Twelfth and Fifteenth Air Forces. Work was carrid out on 3300 aircraft and a further 11,000 were serviced.

During the first half of 1943, engineering work rapidly increased and in June, the depot was given technical responsibilty for the modification of all aircraft in the European Theatre of Operations.

The LOC wages and salaries paid to local civilians were several times more than would have been paid in comparable Northern Ireland jobs. In the run up to Christmas in 1942 American civilian employees at Langford funded parties for 4000 local children. They also contributed enough cash to a War Orphans Fund to create a trust fund to meet the welfare requirements of 17 children whose fathers had been killed as a result of Luftwaffe bombing raids on Belfast in the Spring of 1941. Via the auspices of the Belfast City Council for Social Welfare they were brought to the base from time to time for treats and special events. 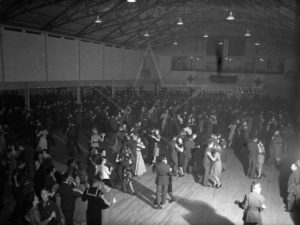 Even though the work at Langford was demanding, American personnel found time to relax on and off the base. A wide range of entertainment and recreational interests were catered for, including badmiton, baseball, basketball, bowling, tennis, amateur photography, rifle ranges, a library and radio broadcasting studio for the depots Nit Wit Network. In December 1942, a 750 capacity cinema was opened. It was here that the Glenn Miller Band played to a capacity audience on 13 August 1944. Bob Hope, Frances Langford and Al Jolson were just some of the additional celebrities who gave concerts on the base. 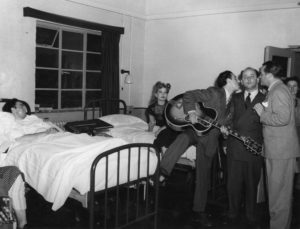 Belfast and other towns were frequented by LOC and Army Air Force personnel; the American Red Cross Club, Plaza Ballroom and 400 Club in Chichester Street, Grand Central Hotel in Royal Avenue and Floral Hall at Bellevue were the most popular attractions. Also popular were the homes of local families where homespun entertainment and hospitality was greatly appreciated and lasting friendships formed. 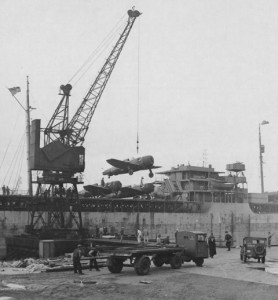 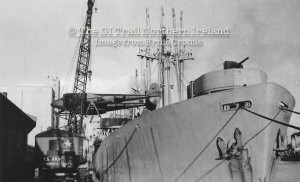 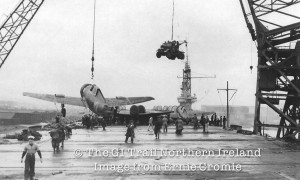