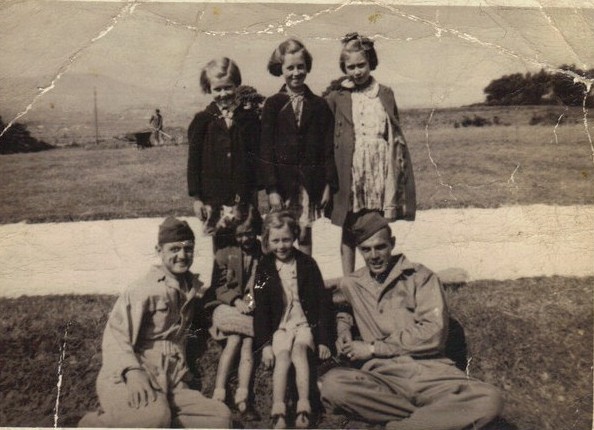 The Lisnabreeny Military Cemetery is situated in the Castlereagh Hills near Lagan College and is one of our Top 5 Must See Locations. Lisnabreeny was brought into use in 1943 and by the end of the war contained the graves of 148 US servicemen from the USAAF, US Army and US Navy. A beautiful memorial made from Mourne Granite was erected on the site, including the names of the 148 men who served and died here. This site is the perfect place to visit for those who want to pay their resepects to the fallen US personnel, and is only 15 minutes from the Belfast City Airport. 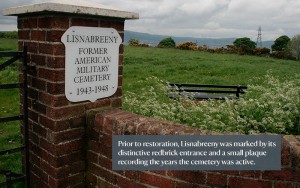 Lisnabreeny American Military Cemetery was once a temporary burial ground for US servicemen all of whom died in Northern Ireland between 1942 and 1945. 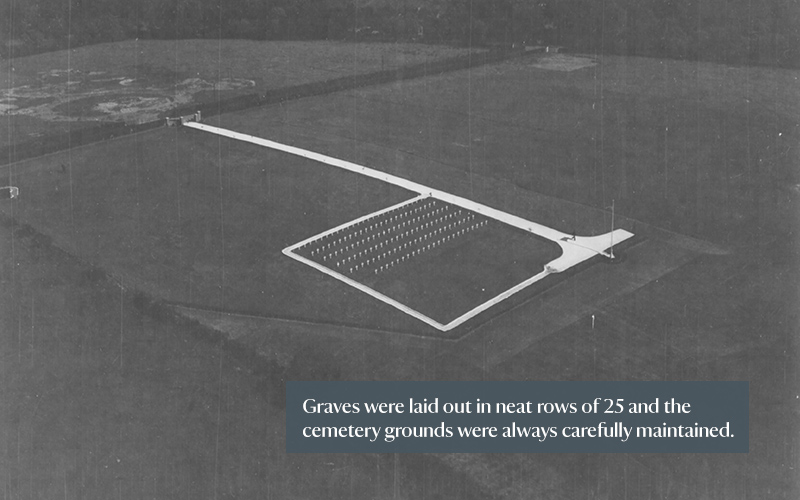 148 servicemen, including eight whose identities remain unknown, were buried here. The dead included members of the US Army and Navy, and around 61 were members of the Air Forces. They had died from natural causes, in road traffic accidents or during training, and around 40 men died in air accidents. 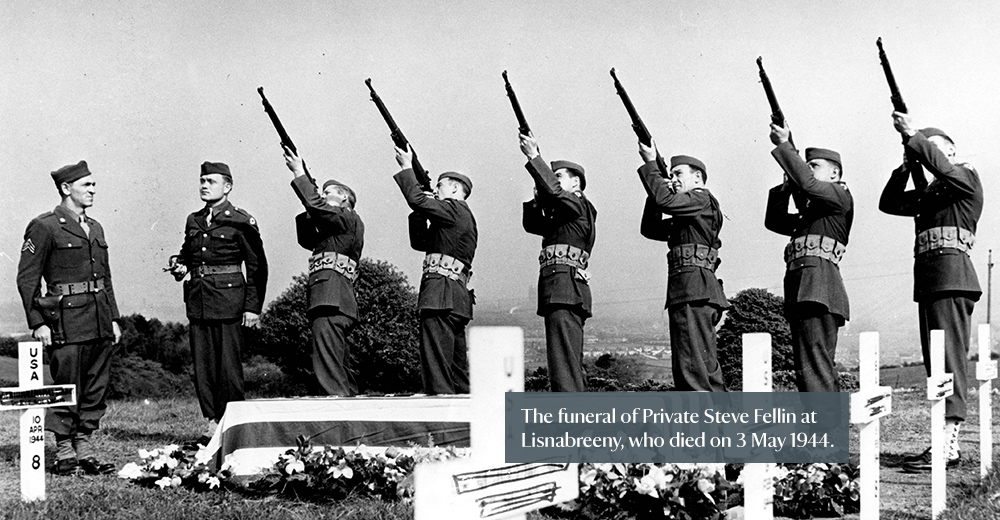 Information on the Plaque at the site of the Cemetery

“The US Army special Observer group approached the war office in London on the 9th December 1941 to obtain burial grounds for American Forces in the United Kingdom. Two plots were initially set aside for emergency burial in Northern Ireland one in Londonderry and the other in Belfast. The Belfast plot located in the City Cemetery extending to one sixth of an acre was chosen.

The first American servicemen to die in Northern Ireland were three members of the US Navy who lost their lives in an accident at the American Naval base in Londonderry.

On the 2nd December 1943 a ten and a half acre plot of land at Rocky Road was officially opened as Lisnabreeny American Military Cemetery. It was decided to relocate all the deceased personnel to this new site.

Between the 23rd May 1944 and the 1st June 1944 all of the forty-one bodies previously interred in the City Cemetery were exhumed and reinterred at Lisnabreeny. By the end of the war a total of 148 American Servicemen were buried in Lisnabreeny American Cemetery.

The cemetery was accessed by a red brick entrance with iron gates on the Rocky Road. A white gravel driveway lined with cherry trees lead to a flagstaff with Stars and Stripes hoisted daily. The graves were laid out in rows with twenty-five to each row and each grave had a simple white mark, either a cross or a Star of David depending on religious domination bearing name rank and date of death.

The cemetery was looked after by five US personnel with the minimum of two on duty at any one time. A Nissan type hut was located at the site to provide storage for official space for maintenance equipment and cemetery records. 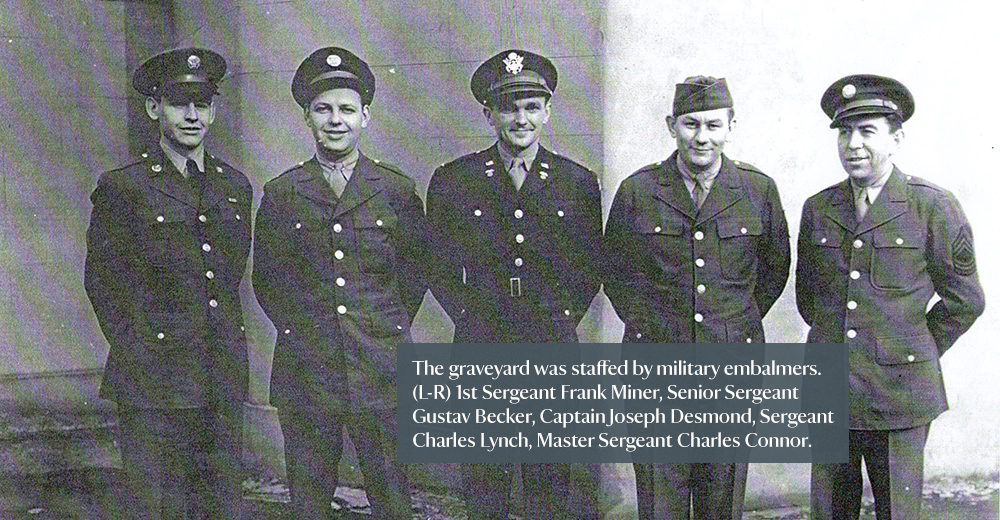 The cemetery was maintained to a very high standard with grass regularly mown, trees and shrubs clipped and pruned and the stone path boarder whitewashed weekly. Following the end of the war the cemetery continued to be maintained right up onto 1948 when all the deceased were exhumed and either transferred to the permanent American War Cemetery in Cambridge or repatriated to the United States at the request of their families. At this point the cemetery was deactivated and all that remained to indicate it was the red brick gateway on the Rocky Road. 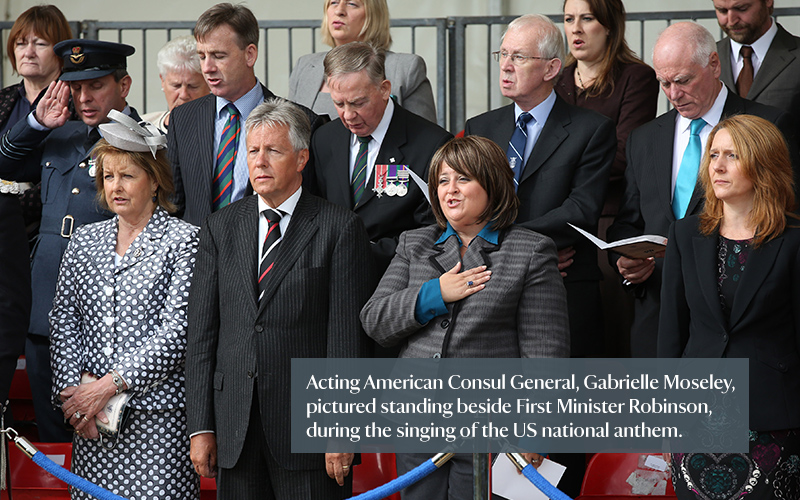 Visting Lisnabreeny
In 2013, a new memorial garden was opened at the cemetery. It includes a granite monument engraved with the names of all 148 US servicemen who were interred at the site.

On certain days of the year, the Stars and Stripes is raised in tribute to these brave soldiers who gave their lives in service of their country.

The Lisnabreeny American Military Cemetery project was funded by Castlereagh Borough Council and the National Trust.