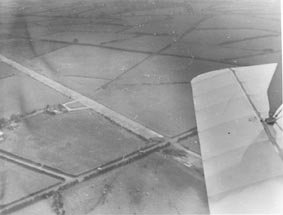 Millisle Airfield is also known as the ‘unfinished airfield’ as construction was abandonded shortly after it began. If you would like to visit the site at where the airfield was supposed to be situated you can head for the Movilla Road, between Newtownards and Donaghadee, BT23.

The below information has been complied from forgottenairfields.com

Construction of the airfield had already begun when the entire project was cancelled. According to AirfieldInformationExchange the airfield was due to become a USAAF Bomber base.

When the Air Ministry ordered Sunday working, the local Presbyterians held a series of prayer meetings. The runway under construction began to show undulations on the north side, but the likelyhood is that it was not caused by divine intervention. Construction of the runway had begun directly on top of boggy grassland.

Local houses and farms were blown up to make room for the new airfield. Only one survived, because it was used as an office by the construction company. In late 1944 a second house was blown up only one day before construction was halted.

After the war the extensive buildings on the north side of airfield (Donaghadee Rd) were used by farmers and later small businesses. The WAAF accomodation and post office were small buildings off to the west (Gransha Rd) and were demolished after the war. Although the airfield was never completed, the runway that was built was used severeal times after the war.. Today the runway is on private property, and thus not accessible, although it is possible to see it up close. A local road crosses the runway about midway.

Millisle holds the dubious distinction of being the only uncompleted airfield of World War II in the UK. 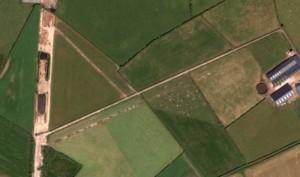