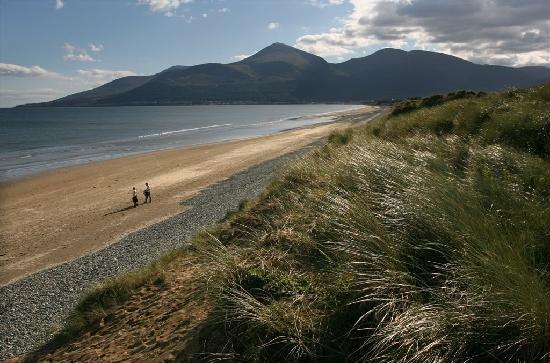 Soldiers were situated along the coast from Newcastle the whole way into Dundrum and along to Clough.

Murlough hosted US soldiers due to the small airstrip here, some of whom were based in Murlough House. The RAF airstrip was located between Dundrum and Newcastle and was known as 19 Satellite Landing Ground. In 1942 the US 1st Batalion, 13th Armored (1st Division) arrived followed by the 828th Tank Destroyer Battalion (XV Corps) in April 1944.

Make sure you take a walk across the beautiful Murlough Beach…the perfect place for a picnic!

Onward towards Dundrum where you can explore the old Norman castle before heading towards Clough. Dundrum hosted elements of the 1st Armored Division from 1942. Some were based in a house along the main street. 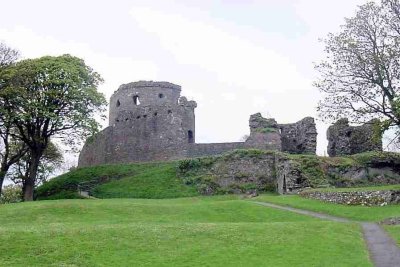 On the main road just before Clough, keep an eye out on your left where you will see the remains of Mount Panther Estate. US troops were based here from 1942, including elements of the 1st Armored Division and 8th Infantry Division

Mount Panther was purchased in 1772 by Francis Charles, 1st Earl Annesley. It is unclear who originally built Mount Panther or who lived in it prior to 1740, when it was known to be the residence of the Rev Dr Matthews.
Local legend associates the name Mount Panther with the Great Cat of Clough – a beast that is said to have prowled the area in ancient days. The first famous inhabitant of the house was the celebrated writer Mrs Mary Delany and her husband, the Very Rev Patrick Delany, Dean of Down.

In 1765, Mount Panther was sold by Bernard Ward to John Smyth of County Louth; and five years later it was put up for sale again, when Mr Smyth was appointed British Resident at Christianstadt, Norway.
The demesne was bought in 1772 by Francis Charles, 2nd Viscount Glerawly (afterwards 1st Earl Annesley), who had the front and return elevations remodelled in stucco.
After his death in 1802, Mount Panther passed into the possession of the Rev Charles William Moore, rector of Moira.
John Reed Allen JP, of Dunover, bought the property from the representatives of Major William Henry Rainey in 1832 for £12,000. Major Rainey had acquired Mount Panther from the Moore family in 1822.
When J R Allen died in 1875 his son George, high sheriff of the county, inherited the estate, which comprised 2,585 acres of land at that time. When George Allen died in 1929, the house – but not the estate – went to a cousin, Lt-Col Thomas Gracey. The estate was split between three other cousins. 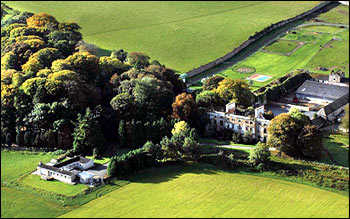 In 1931, Mount Panther was bought by the Fitzpatrick family, who still own it today. When war broke out in 1939, many valuable pieces of furniture from Belfast City Hall were stored at the house, and parts of the grounds were taken over by the US Army.
Paddy Fitzpatrick died in 1957, and Mount Panther then passed to his eldest son, Seamus.
The most historic event ever to happen at Mount Panther took place on a Saturday afternoon in June 1963, when two black limousines swept up the drive. His Excellency the Lord Wakehurst (Governor of Northern Ireland) stepped out of the leading car and enquired if Princess Margaret and her husband, Lord Snowdon, might come in to see the famous ballroom. Teresa Fitzpatrick recalled,

“I got the shock of my life when I opened the door. I brought the royal party through the kitchen and down the passage to the ballroom. They only stayed about 20 minutes chatting, and admiring the plasterwork, and then drove away. It was all over before I realised what had happened!”

Though the mansion is ruinous and the gardens gone, this once beautiful landscape park retains many features of its former glory. The house lies looking down on pasture decorated with well disposed clumps of trees that made up the fashionable surrounding for houses of that era. There are fine views of Dundrum Bay beyond.
A road now cuts through the parkland and a bungalow has been built in front of the house.  There are extensive walled gardens to the rear of the house to the south-west, no part of which is cultivated. The Gardener’s House and offices are ruinous and the glasshouses have gone.
An ornamental garden on the south side of the house shows vestiges of planting and an earlier Pleasure Ground was formerly laid out on the north side of the house, as shown on the demesne map of ca 1800. The two remaining gate lodges, Newcastle Lodge and Side Lodge, both of ca 1830, are in poor condition.