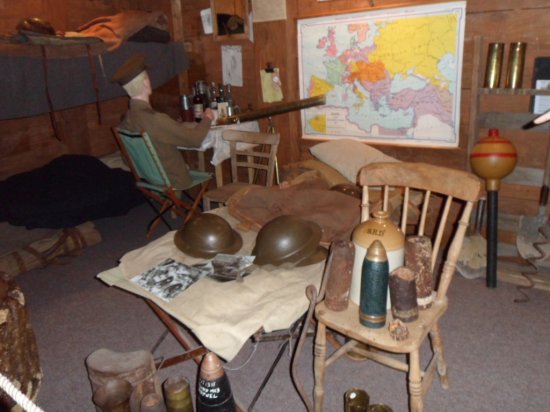 The Somme Museum is situated on the Bangor Road and is an amazing stop on our trail. Even though the Somme Centre is mostly dedicated to the First World War there are excellent displays on the Second World War and other conflicts.

In 1994 the Somme Association established the Somme Heritage Centre at Conlig, between Newtownards and Bangor in Co. Down. Now renamed The Somme Museum, it was built on the site where the solders of the 108th Brigade of the 36th (Ulster) Division were trained after the outbreak of war within the grounds of the Clandeboye Estate.

The Centre is a fully accredited museum, providing exhibitions, displays and information, and is an institution for the study and interpretation of Ireland’s contribution to the First World War, with particular reference to the Battle of the Somme. It was built with the support of European and local funding combined with a major fund-raising effort, supported by the public to commemorate the involvement of the 36th (Ulster) Division, 16th (Irish) Division and 10th (Irish) Division in the First World War.

Organised tours are available and can be booked in advance by contacting the Museum. Each tour lasts approximately one hour and the last tour takes place at 3.00pm each day. Please visit their website for more information: www.irishsoldier.org