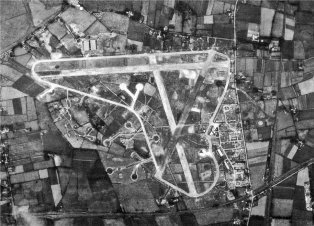 IMPORTANT: Please phone ahead to make visiting arrangements to this site. Please phone Ray on 07724896215 or Ernie on 07974502319.Visits are not available from December – February (http://ulsteraviationsociety.org/) 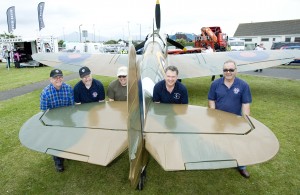 Long Kesh was not a USAAF Station but was the temporary Headquarters of the 8th Air Force Composite Command. From April 1942 a regular service began between London and Londonderry, calling at Long Kesh to drop off or collect passengers, light freight and mail. Therefore American accents were nothing out of the ordinary when the 400 personnel of the 8th Air Force arrived in September 1942. The 8th AFCC had overall administrative responsibility for USAAF activities in Northern Ireland, especially the bomber crew training programme. 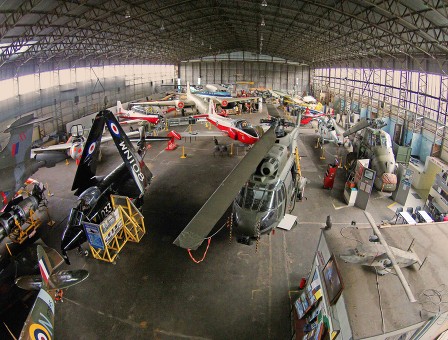 The impressive collection in the Ulster Aviation Society’s hangar

The histories of the World War 2 airfields of Long Kesh and its satellite, Maghaberry, have much in common. Ironically, although both were designed by Air Ministry planners to operate light and medium bomber aircraft, the first pair of hangars to be constructed at each was erected under the auspices of the Ministry of Aircraft Production (MAP) for use by aircraft manufacturers Short & Harland for the assembly of Stirling heavy bombers.  During 1942, at least two Stirlings were completed and test-flown at Long Kesh before the final assembly process was transferred to Maghaberry, leaving Long Kesh to concentrate on Stirling wing production.  This work continued at both airfields until the early part of 1945. 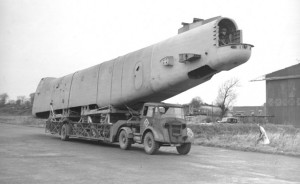 Fuselage of a Stirling en route from Long Kesh to Maghaberry. Dec 1942.

Significantly though, in terms of its planned role, flying at Long Kesh commenced in October 1941 with the arrival of the first of a number of RAF squadrons that were based here during the period up to June 1942, to provide close support to Army ground forces which, had there been an airborne assault on Northern Ireland by German paratroops or imminent threat of an invasion via neutral Eire, would have launched a counter-offensive.  The units concerned were 88, 226, 231 and 651 Squadrons, collectively operating Blenheim, Boston, Lysander, Tomahawk and Auster (Taylorcraft) aircraft.  In December 1941, 1494 (Target Towing) Flight was formed at the airfield within Fighter Command to provide air gunnery refresher training for RAF flying units based in Northern Ireland.

In effect, German plans to invade were abandoned in March 1942, by which time Long Kesh and Maghaberry were taking on new roles.  During February and March, 74 Squadron was based at Long Kesh with Spitfires, to escort troopships bringing the first elements of US Army ground forces to the UK during the final stage of their sea journey.  Following the departure of 74 Squadron, the US Navy commenced a regular air service between London (Hendon) and Londonderry (Eglinton), calling at Long Kesh to drop or collect passengers, light freight and mail, using Lockheed Electra aircraft.  On 1st August, the RAF commenced a regular return troop-carrying towed glider service between Wiltshire and Northern Ireland, normally using Long Kesh as the local terminus.  At the end of that month, personnel of the United States 8th Air Force Composite Command arrived.  This organization had overall responsibility for the extensive United States Army Air Force presence in Northern Ireland and was accommodated at Long Kesh until November 1942 when a more permanent Headquarters was completed six miles away at Kircassock House near Moira.  In December 1942, Long Kesh and Maghaberry were taken over by RAF Coastal Command to accommodate No 5 Operational Training Unit, which remained at Maghaberry until August 1943 and at Long Kesh until February 1944, teaching trainee aircrew the techniques of maritime operations, using Beaufort, Hampden, Hudson, Ventura and Oxford aircraft.  Sadly, numerous fatal aircraft crashes occurred during that period, to which some of the gravestones in nearby Eglantine Cemetery and a memorial window in the Church bear silent and poignant testimony.

Only one further RAF flying unit was based at Long Kesh during the War, from March 1944 until February 1945, when 290 Squadron facilitated the training of anti-aircraft gunners, using Oxfords and Martinets.  At the same time, the airfield was used intermittently as a shore base by a number of squadrons of the Royal Navy (Fleet Air Arm).  On 17th July 1945, Their Majesties the King and Queen with HRH Princess Elizabeth arrived in Dakota aircraft for the first airborne Royal Visit to Northern Ireland, followed in August and September, respectively, by General Eisenhower and Field Marshal Montgomery.  The last RAF flying unit to be based at Long Kesh was the Communications Flight of HQ RAF Northern Ireland, from September 1945 until the end of the year when it was transferred to Belfast. 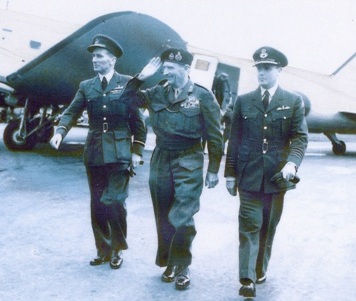 Field Marshal Montgomery at Long Kesh on 13 September 1945. Taken following his arrival in his personal Dakota KN628 from Blackbushe for a visit to Northern Ireland which lasted a number of days.