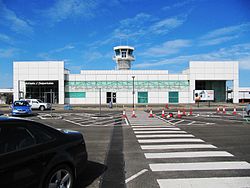 Eglinton Airport now the City of Derry Airport was originally planned to become a base for US day and night fighter aircraft. This was part of a short-lived plan for the Americans to take over responsibility of the air defence of Northern Ireland from the RAF. In July 1942 the first pilots arrived and spent a short time in Northern Ireland learning how to fly Spitfires, which was a new experience to these US pilots. Lockheed P38 aircraft began arriving in November but by December the pilots began heading for England, the last leaving at the beginning of January 1943. Unfortunately they left on a tragic note due to the crash of a P-38 which dived into the tarmac of Langford Lodge after leaving Eglinton in December, killing 21 year old Lieutenant Scott K. Giles from Kansas. 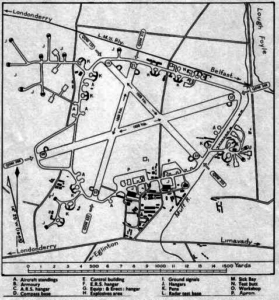